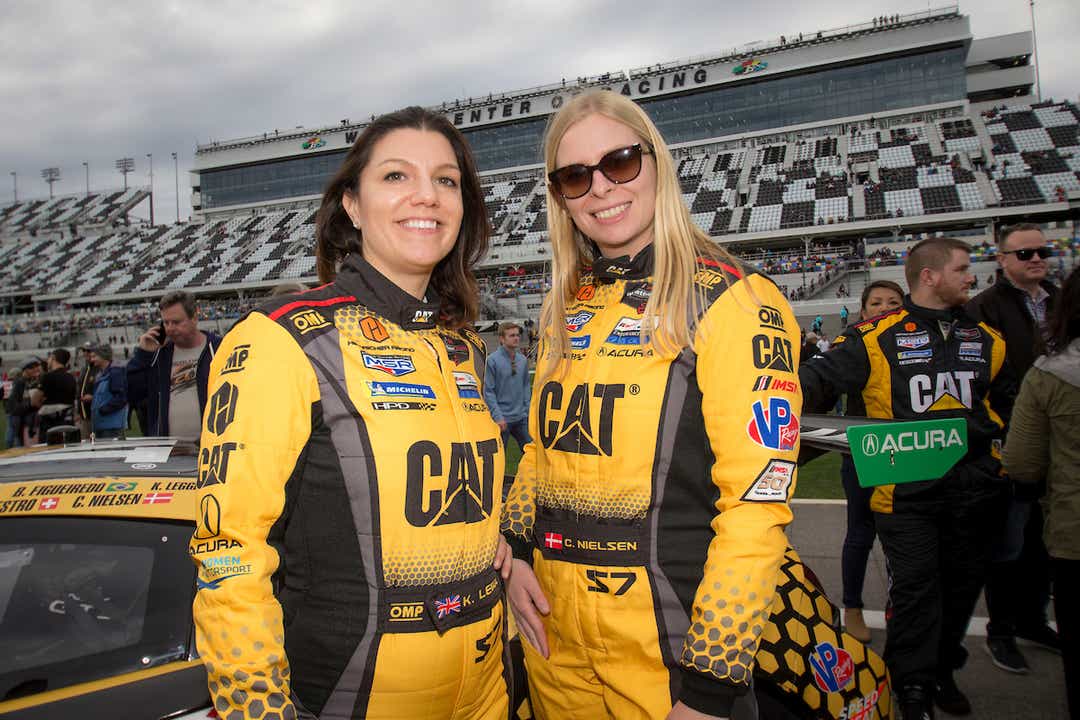 While gender equality has grown exponentially across many sports in recent years, motorsport has often been criticised for failing to follow suit.

And when it did try to address the issue with the creation of the W Series, it came under intense scrutiny for taking the perceived wrong approach.

As a result, the stereotype that woman cannot keep up with men in this field still pervades.

But across the water, two individuals have been proving that very wrong.

Not only have Christina Nielsen and Katherine Legge been matching their male counterparts in America; they’ve been beating them.

In 2016, Nielsen became the first woman to win a major full-season professional sports car championship in North America, finishing top of the GT Daytona division in the WeatherTech SportsCar Championship. The Dane did so alongside co-driver Alessandro Balzan, the duo taking two wins across the 11-race season after finishing runners-up the year before.

Proving this wasn’t a one-off, they then claimed the title again the following year with a series of impressive performances, while Legge also made her first mark on the championship with two wins alongside Andy Lally after switching from the Prototype category.

Guildford-born Legge then nearly claimed the crown herself in 2018, finishing second in the championship by just four points after winning two races and featuring on the podium another five times.

@katherinelegge: This coming season is an amazing opportunity to showcase the very best female driving talent. To partner with Lamborghini really shows how things have developed over recent years for #womeninmotorsport and a big part of that is thanks to the work of #FIAWIM. pic.twitter.com/zejpqbOg3b

So why have their accolades barely been recognised in Europe, where they hail from?

Firstly because they took place so far away. It’s a case of out of sight, out of mind – if you’re not excelling on home soil then your achievements very rarely get picked up by the media, almost as though they don’t matter.

Football manager Graham Potter is a great example of this. He took Ostersund from the fourth division to the Allsvenskan – Sweden’s top tier – in just five years. At a time where this country was crying out for young English managerial talent, here was one performing wonders yet barely anyone knew who he was.

Indeed it took his team coming up against Arsenal in the Europa League for the media to only begin to recognise his achievements.

The same could certainly be argued for Legge. Recently more and more people have been arguing that women should be given opportunities in motorsport and yet was one showing just how good they can be if treated correctly. But because her racing was taking place in America and not on our shores, it seemed to pass everyone by.

It was interesting to note the media coverage afforded to Legge earlier this year was when it was announced that she would be part of an all-female team participating in the 2020 European Le Mans Series and the prestigious 24 Hours of Le Mans race in June.

While this is newsworthy, it’s not novel for Legge as she and Nielsen have competed in teams featuring only female drivers in both the 2019 and 2020 GT Daytona WeatherTech SportsCar Championships. Yet where was the press coverage surrounding this?

Furthermore, the main line being peddled by the British media around the Le Mans story was not that Legge was being offered a chance to show European fans what they’ve been missing all these years. Instead they focussed on the fact that she’ll be linking up with Sophia Floersch, the young German driver who hit international headlines following her horrendous crash at the 2018 Macau GP. It actually felt as though Floersch was the main talking point and Legge’s return to Europe was just a side note.

The second potential reason behind the lack of attention for Nielsen and Legge is that they have been successful in a category of racing barely understood over here. In the UK, the only motorsport we’re really exposed to is F1. Of course there are so many more types of racing that take place but it’s the only one that you ever hear anyone speaking about.

Ok yeah, these women won some events but they did so with the help of a man in races that last far too long (between six and 24 hours, with drivers sharing the workload in stints) and in cars that, if you have enough money, you can buy yourself – who cares?

Just because these women aren’t winning in a category of racing we necessarily understand, it doesn’t make their achievements any less noteworthy.

Women will only get more opportunities at the very top end of motorsport when it becomes the norm right the way through the system.

And that’s why we need to highlight the brilliant work these two women are doing.

“Daytona is always the one that got away.” – @ChristinaRacing

The all-female team of GEAR Racing powered by GRT Grasser has its sights set on the top step at @Rolex24Hours at @DISupdates!

While their accolades may not yet be recognised by the wider world, there will be young female racers out there who already look up to them, who see them as proof that they do have a future in motorsport.

And if we want to see more exciting talent such as Floersch, Jamie Chadwick, Alice Powell and Bitske Visser emerging, we need to give the best female racers as much media coverage as possible, no matter what series they’re racing in.

We’re not waiting for a revolution to begin in motorsport. It’s already begun, with Legge and Nielsen leading the charge.

Now it’s up to us to recognise and champion them.