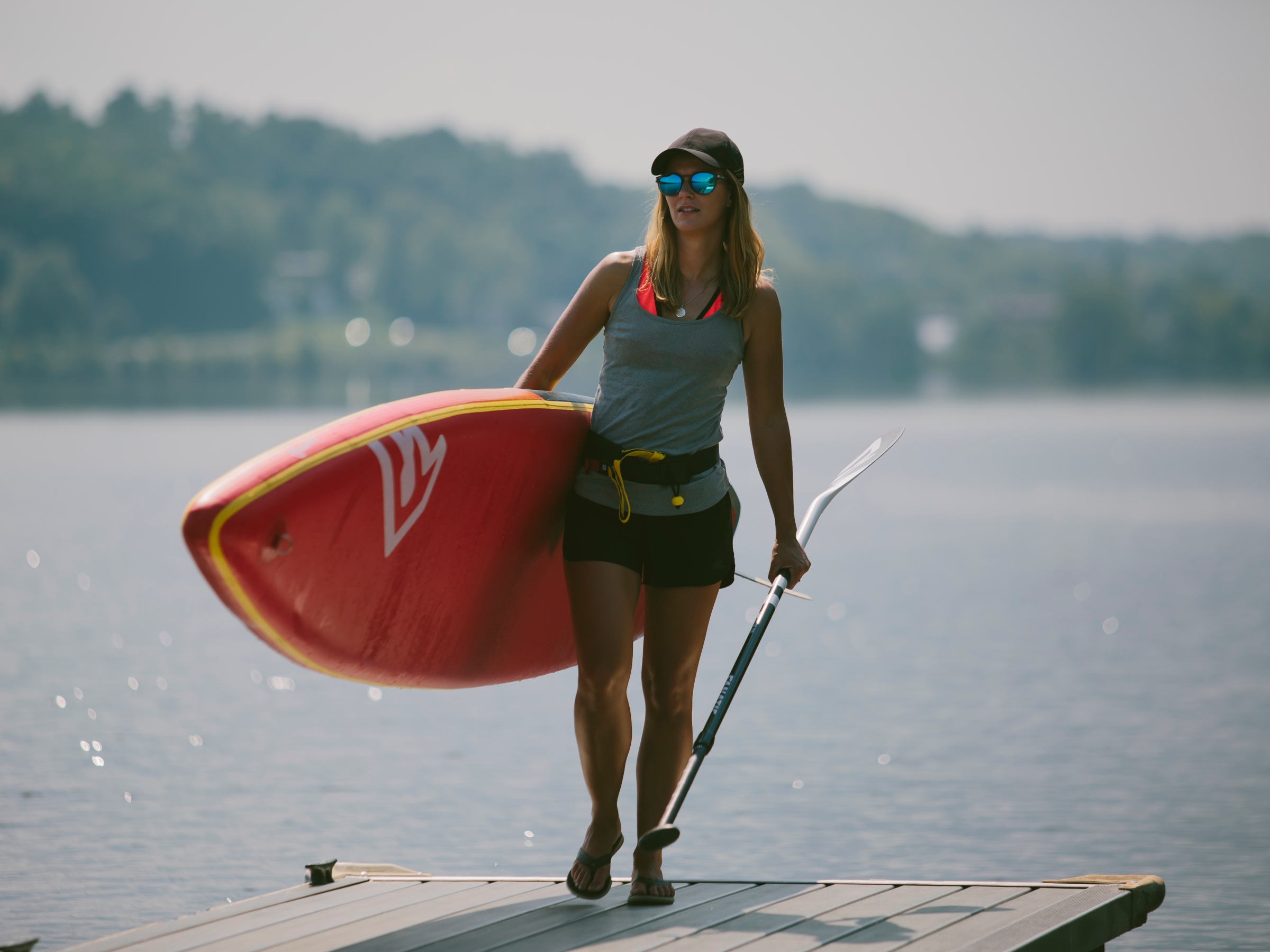 As the saying goes, every cloud has a silver lining.

No-one understands this better than Lizzie Carr – or Lizzie Outside as many know her – who was diagnosed with cancer aged just 26.

“It completely blindsided me to be honest,” she recalled.

“I didn’t expect it at all. I thought it only happened to older people, other people – it didn’t happen to you. So when it did it was a huge shock.”

But just a few years on Lizzie is an inspirational mental health activist, environmental campaigner and blogger.

On top of this she holds three world records, having become the first woman to stand up paddle board the length of England, the English Channel and New York’s Hudson River completely unsupported.

That’s not bad for someone who discovered the sport completely by chance, having watched someone else trying it while recovering from radiotherapy in the Isle of Scilly.

Not only did it allow Lizzie to recover her health then, it continues to give her a platform to help control the crippling anxiety she can feel, the water being somewhere she can leave her worries behind.

She explained: “I can be really heavily anxious but I’ll go out, spend a couple of hours out in the freedom and space of the water and I can come back a different person.

“It calms me, relaxes me and most importantly gives me much more perspective.

“I think a lot of people understand this through their own activities – a lot of people say when they run it clears their head and it gives them perspective back and that’s great.

“My way of doing that has been through paddle boarding and I’m lucky to have found that.”

Not only does paddle boarding provide a way for Lizzie to cope with her anxiety though; it has also unearthed a burning desire in her to try and rid the world of plastic pollution.

The stats are startling. An estimated 5 billion tonnes of plastic are believed to be in landfill or the natural environment, while in 2010 a study revealed around 8 million tonnes were in our oceans.

However, as David Attenborough’s ‘Blue Planet II’ showed, this is now probably only a fraction of the total percentage, while there are also likely to be millions more in rivers and canals.

The passion with which Lizzie speaks about this issue is abundantly clear in our interview. This isn’t something she’s doing in her spare time – she is dedicating her life to keeping our planet a clean, inhabitable place for humans and animals alike.

“Paddle boarding has connected me back with the natural world and the environment – it was by being out on the water that I really started to understand the problems our planet is facing with plastic pollution,” she said.

“I was so horrified by the amount of plastic I was seeing and the impact it was having on wildlife.

“There were coots nests that were made up more of plastic than they were twigs and swans nibbling at wrappers.

“Once you’ve seen that you can’t unsee it and it is really upsetting.”

She set up the Plastic Patrol initiative after she completed her first expedition paddling 400 miles from Surrey to the Lake District 2016, during which she photographed and mapped each piece of rubbish she saw on our waterways before clearing it away.

On #PlasticPatrol in Cornwall this summer – it was the perfect day for a paddle and pick, but found quite a lot of rubbish considering the remoteness of our beach stops. pic.twitter.com/TvgiqZsJan

This is something she now asks her thousands of followers to do on the Plastic Patrol app, with a staggering – and worrying – 50,000 images already uploaded from 22 countries.

Plastic Patrol is more than just a geo-tagging app though – it is an ongoing clean up operation where Lizzie arranges trips to take people out on the water and give them an experience of paddle boarding, while in return they help her remove any pollution from the rivers and beaches local to them.

With the public awareness of the issue significantly heightened following Blue Planet II, she is finding more and more people are wanting to get involved and help.

“I feel as though there was this lightbulb moment where everyone just woke from to the sleepwalk they’d been in,” she said.

“The general public really started to understand what this means, the scale of this problem and started thinking about how they can tackle it at a very local level in their own lives.

“To be able to take people out on the water and give them a great way to engage with nature while trying a new sport is brilliant for confidence building but will also connect them first hand with the issue of the environment.

“It has so many benefits – they walk away from that and they want to do something positive, they want to make changes in their lives because they have experienced in their own way what that means for the environment.”

In August Lizzie took Plastic Patrol to America, arranging lessons and clean ups along the Hudson River while also completing the impressive feat of paddling its entire 275km length in just eight days.

This expedition also proved that paddle boarding isn’t always the calm, serene sport it can often seem as she endured some extremely challenging conditions caused by the remnants of Hurricane Florence.

Recalling the challenge, she said: “It was an incredible journey. But by the time I finished I was pretty exhausted!

“For two weeks it was before I arrived, New York was blessed with glorious blue skies, really warm sunshine, calm and no wind.

“But within two hours after I began the first of eight days of horrific, unpredictable weather started.

“There was a thunderstorm when I was on the water – it was really hard to get off the water somewhere safe and it’s just really uncomfortable in those situations.

“Obviously I didn’t have any support on the water with me so it wasn’t like I could just jump in a boat and be whisked off to shore! It definitely made it more of an adventure but it makes it quite scary at moments too.”

Lizzie Carr’s #TheHudsonProject is underway, paddling the navigable length of the Hudson River & features in tonight’s London Evening Standard explaining why manufactures & retailers need to be held accountable for #plasticpollution. Track her journey at https://t.co/6uImUP7RYR pic.twitter.com/WI08nE2GiO

As well as the challenge itself and the time spent with the locals, Lizzie was also being filmed for a mini documentary showcasing her expedition, while she will also be releasing a book outlining her experiences paddling Britain’s rivers and canals very soon.

With more expeditions in the pipeline and plans to grow Plastic Patrol, it seems as though Lizzie will be inspiring us to get on the water and look after both our mental health and our planet for a long time to come.

Make sure you head over and visit the Plastic Patrol website to find out how you can get involved too!