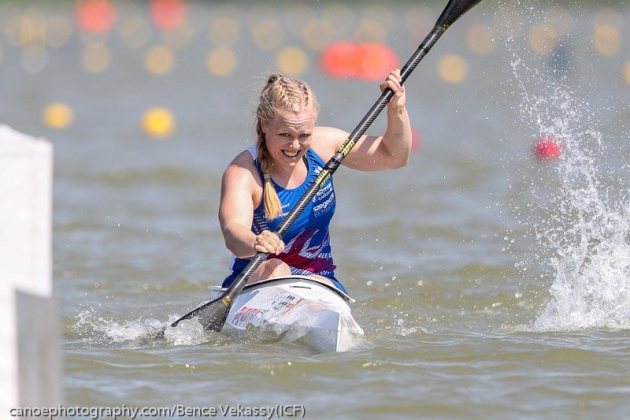 Laura Sugar is one of those athletes you can’t help but be jealous of.

Many of us can only dream of being skilled enough to play for our country in one sport. Sugar has represented hers in three.

She made her debut for Wales’ hockey team in September 2012 and made 11 appearances in total, playing alongside current GB stars Leah Wilkinson and Sarah Jones.

However just weeks before her debut Sugar, who was born with a club foot and as a result has no movement in her ankle, had been watching the London 2012 Paralympics and suddenly realised that there was potentially another sporting avenue she could pursue.

“Hockey was my main sport. I thought this was me and this was my career; it one of the sports I tried at school and the one I was really good at,” she recalled in an exclusive interview with SportSpiel.

“I watched London 2012 while working at a kids camp – I think I was sat making clay models of alien athletes because it was space-theme week. I was watching the discus and they always go quite close up on the feet in the circle and I realised ‘I’ve got that foot’.

“I knew I was quite fast, I certainly wasn’t the slowest in the hockey world, and that’s how I went and tried it out.”

Available on our website, @Audioboom, @ApplePodcasts, @SpotifyUK or wherever you get your podcasts!

Since then she has gone on to represent Great Britain as a sprinter at the Rio 2016 Paralympics and won several European medals.

She has also successfully transitioned into para-canoeing too, winning European bronze and World silver last year after just a few months of training.

As a result Sugar is in with a strong chance of being on the plane with Paralympics GB to compete in at least one, if not both, of her sports at Tokyo 2020.

But having grown up never letting her foot hold her back and with a condition that isn’t as obvious  to see as others, the 27-year-old admitted she was nervous about initially transitioning into para-sport.

“I knew I could never stand on one leg or some things but because it was my foot I always found another way to get around it. I just always had the attitude that it was never going to hold me back,” she said.

“When I was born my parents were told I’d be absolutely fine as long as I didn’t become a sportsperson. But it was only when I got into para-sport that my parents told me what the doctor said.

“I knew I was quite fast, I certainly wasn’t the slowest in the hockey world, and that’s how I went and tried it out.

“I was terrified, especially from the identity change of being the hockey player to the disabled athlete when I’d never thought that my whole life.

“That identity change was weird and I went along feeling a bit of a fraud because I didn’t have as bad a disability as some other people.

“That was the only thing holding me back that day but I’m so glad I went out to that event and I’m very thankful for London 2012 because otherwise I may never have known I could compete at a Paralympics.”

🥈in her World Para Canoe debut!@LauraSugar1 ran for 🇬🇧at Rio 2016 & hopes to double up at Tokyo 2020 after securing GB a place in the VL3 event at those Games with SILVER.

Less than four years later, Sugar was pulling on the GB vest at the Rio 2016 Paralympics and outperforming her expectations by finishing fifth in the T44 100m and 200m finals.

While she didn’t win a medal on that occasion, to see how far she’d come in four years made it an event she looks back on very favourably.

Recalling the 100m final in particular, she said: “I was so nervous because I put so much pressure on myself. You do it because you enjoy it and then you turn up and in the cool room you think ‘why am I doing this?’

“You literally hate yourself before every race, ask why and then you get out there and you race and you love and you think ‘I want to do it again!’

“The 100m final was the last race of the whole Paralympic Games on the track. It was about 9pm at night, a packed stadium and I remember standing on the start line. I just stood there and smiled.

“I ran a PB, came fifth, beat the reigning champion and that was the only time I’ve appreciated what I’ve done while I’ve raced.”

With just a handful of months left until Tokyo 2020 Sugar could well be representing Great Britain once again in both athletics and para-canoeing, having made an incredible start to her career in the latter last year.

Her KL3 silver medal at the 2019 Sprint World Championships followed on from a European bronze just three weeks before and was a huge statement of intent, showing just how good she could become with even more training under her belt.

Reflecting on a great first season as part of the paracanoe team, it’s exceeded all my expectations and yet made me hungry for more! Thanks to the amazing team and especially @canoecol for taking me on and @rogweir as well for putting up with me 😊 #paracanoe #kayak pic.twitter.com/zDXZENaCPo

But she’s not letting herself get carried away.

While it may be easy to dream of securing that first Paralympic medal, Sugar knows there’s a long way to go yet that includes being selected as Great Britain’s representative in the event.

Most of all though, she just wants to ensure that she continues to enjoy the career she has worked so hard to turn into a reality. That, for her, is more important than any medal.

“We’ve got goals set out and obviously it being a Games year the ultimate goal is to go to Tokyo and challenge for a gold medal,” she said.

“But there’s loads of little baby steps along the way so I just need to keep progressing, keep giving my best each day and hopefully the pieces will come together.

“It’s also about enjoying the journey along the way. If you put all the pressure on getting that one goal and it doesn’t happen you’re left with nothing. I’ve spoken to loads of gold medallists who have had mental health issues because it’s not been as good as they thought it was.

“You’ve got to enjoy the journey we have on the way. So I’ll be enjoying my sport, trying to get better in both sports and see where that takes me.”

← Okoro hoping for Tokyo swansong as she prepares to give her all in 2020
Georgina Roberts: Cancer and transforming a ‘neglected’ sport →