When it comes to sport, pretty much anything and everything has happened in the past 12 months. From tales of widespread corruption and state-funded doping to some of the most remarkable sporting performances ever seen, nothing has been too farfetched for this frankly insane year. There are always some which stand out more than others though and here are the ones which caught my attention (and yes, I am aware that this is a slightly strange number but you’re just going to have to deal with it).

We start off with the most recent feat. A relative rookie at just 22 years of age, Lizzie Kelly wasn’t a particularly well known jockey within the world of horse racing, let alone outside of it. That all changed on Boxing Day though as she became the first woman ever to win a Grade One National Hunt jump race – the most prestigious race category in the country – on the much-fancied Tea For Two. In the year when pioneering female jockey Haley Turner announced her retirement, the emergence of Kelly alongside another youngster in Sammy-Jo Bell signifies that her legacy is already having an impact. 2016 should be an incredibly exciting year for these hugely talented riders.

We now cross over to football and reflect on another magnificent installment of the Women’s Super League. It was an incredibly unpredictable season, with four teams still battling for the title right up until the final few games and the eventual champions – Chelsea – not being crowned until the final day. However, it was Sunderland who really caught the eye. Widely tipped to be relegated back down to WSL2 at the start of the year, the ‘Maccams’ even took themselves by surprise and were league leaders with just a handful of games to go. Although their form tailed off towards the end of the season, few will forget their incredible Beth Mead-inspired 4-0 victory over Chelsea in July alongside the superb football they played all season long (although I may be a bit biased).

This isn’t a specific moment as such butJohanna Konta certainly deserves a place on this list after a superb run of form in which she lost just 2 out of 25 matches. In a year where Laura Robson and Heather Watson were still suffering with their various ailments, it was left to the Australian-born player to fly the flag for British tennis. Konta did just that. After being knocked out by Maria Sharapova at Wimbledon, she went on to win 2 ITF tournaments as well as earn a place in the quarter-finals at the Wuhan Open and even the second week at the US Open. Her grit and resolve against some of the world’s best was astonishing and saw her rise to a career best ranking of 47, meaning she is now the British number 1. Let’s just hope she can build upon this and become a real force. 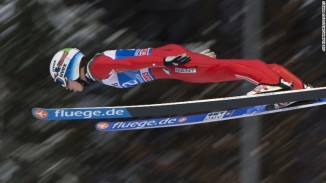 Unless it’s the year of a Winter Olympics, sports such as ski jumping receive very little coverage in this country. Why should they? It’s not as if we’re any good at them! However, every now and again something happens that catches the eye and this happened in Febhttps://ransports.wordpress.com/ruary as the world record for the longest ski jump was broken twice in little over a day. Slovenia’s Peter Prevc was the first to achieve the feat by jumping a whopping 250m – the equivalent of around 25 double-decker buses! Not to be outdone, Norwegian Anders Fannemel went even further the next day, adding another 1.5m (the average height of a woman from the Philippines) onto the record.

7) Scavengers now at the top of the food chain

If anyone had said to me this time last year the Leicester City would currently be challenging for the Premier League title, I would have laughed. A lot. They were bottom of the league and struggling for points with a manager who was more interested in picking fights with opposition players and journalists than trying to turn things around. Despite this, a remarkable run to survival at the end of last season has turned into a genuine challenge for the title this time round, despite the fact their team contains no big-name players. Even the most hardened of opposition fans will struggle to deny that The Foxes have put a smile on their face at some point this season.

Steven Finn is one of those cricketers who you can’t help but love. He constantly has a smile on his face and always gives everything he has to the cause, no matter what. That’s why his demise two years ago was so upsetting. Deemed ‘unselectable’ by his own national coach, it seemed as though this prodigious talent was now a lost cause. Fortunately his county stuck with him, coaching him back into form and when handed his chance this summer he took it with both hands, ripping Australia apart during the third Ashes Test. Stuart Broad may have captured the headlines with his sensational bowling in the next game, but for me Finn’s scintillating return to the side was even sweeter.

At long last, it looks as though Great Britain finally has a new crop of swimmers ready to take on the very best. In what was an incredibly successful World Championships this year, Jazz Carlin, Siobhan-Marie O’Connor and James Guy really shone through and left the nation feeling dizzyingly positive at the prospect of medals come Rio 2016. There was one swimmer in particular who really stood out – Adam Peaty. He broke the 50m breaststroke record on his way to winning gold but it was his performance in the 100m breaststroke final which really showed his class. Nearly a body length behind Cameron van der Burgh with 50m to go, Peaty somehow managed to power his way past the South African to snatch gold at the last possible moment. Breathtaking.

Athletics has had a tough year, as I’m sure you are well aware (if not, where have you been?). Despite this, there have been some great moments too. Greg Rutherford became only the fifth ever British athlete to hold the Olympic, World, Commonwealth and European titles at the same time while Jess Ennis-Hill won an emotional World heptathlon gold on her return to competition. There was one man who overshadowed them all though; Usain Bolt. He had the weight of the world on him going into the Worlds. With talk of doping rife, the pressure was on the Jamaican to beat the twice-banned Justin Gatlin to ‘save his sport.’ Whether you agree with this or not, the fact is that the future of his sport relied on this one performance. But this is Bolt, the most laid back man in the world. He eased his way to victory as though this was just any other race. Pressure? What pressure?

3) Can we finally accept him as British?

It is often seen as a stuffy, elitist, middle-class sport in this country but this year saw the nation go tennis mad as Andy Murray led Great Britain to an astounding Davis Cup victory, the first since 1936. Never before have I witnessed such noise or patriotism on a court; it was strange at first, but I loved it. Right throughout the tournament you could see how much it meant to Murray; there was no way he was going to let this chance slip through his fingers. Say what you like about him, no other tennis player has captured our hearts in such a way in living memory. Seeing him collapse in a tearful heap after the winning point in the final was a special moment that will never be forgotten.

2015 was finally the year that English football actually did something of note. The fact that we all reminisce about a tournament that we won nearly 50 years ago shows how rubbish the nation has been since.

No longer though as the women’s team performed magnificently to secure third place in a highly competitive World Cup in the summer. Although there are numerous moments which caught the eye, Lucy Bronze’s wonder strike against Norway that handed the team their first ever knockout win at a World Cup was something special. Women’s football receives a lot of unfair criticism but that strike alone is enough to prove that these players deserve to be recognised as legends.

1) Against all odds
Although the England team may have failed miserably, the 2015 IRB Rugby World Cup was a huge success. There were tries aplenty, attacking rugby, controversies and fitting farewells to some of the all-time greats. Despite this, the greatest moment of all actually came on the second day of the tournament as Japan stunned defeated South Africa in one of the greatest games of rugby the world has ever seen. I was at Twickenham at the time for the France-Italy game and to see 70,000+ people from all over the world going wild when the minnows scored the winning try was… Well, I can’t describe it. Let’s just say I was speechless (and that doesn’t happen often).

← What is ‘greatness’?
A Sad State of Affairs →