No Quick Fix For This 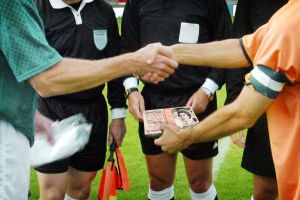 There are some issues in sport that never cease to disappear. The pattern they follow also does not change – a controversial action is followed followed by a whole host of opinions as to what should happen before nothing is done and the problem goes back underground. This time round, it is the turn of match fixing to rear its ugly head.

At the end of the 2010/11 season, Zaragoza needed to beat Levante in order to avoid relegation from La Liga, Spanish football’s highest league. They won the game 2-1, moving themselves up to 13th in the table and sending down Deportivo La Coruna to the second tier instead. On the face of it, nothing out of the ordinary occurred here. However, news broke today (16th December) that prosecutors have now alleged that Zaragoza paid their opponents €1million to lose the game. Not only that, but 10 people, including Manchester United’s Ander Herrera, have been accused of withdrawing tens of thousands of pounds in order to fund the deal.

Fixing sporting events and matches has long been a part of sport, with stories going back to the 17th century and even further. In those days, though, society was much different. There was a clear and distinct hierarchy, with games being thrown in order to appease those with power, especially if they were royalty, or at least had links to. However, in a world where ‘equality’ is a buzzword and sport does not have much influence on the running of day-to-day life, fixing in these terms no longer makes any sense. As a result, there is only one potential explanation that does – greed.

Monetary rewards are the most commonly thought of examples of greed, followed by success. In Zaragoza’s case though, if they did pay the opposition to lose the match then they were just greedy to maintain their status. Football is a game where some win and others lose, but it seems as though they thought they were above this. Either that or they were desperate not to be relegated, potentially for financial reasons. And if you were Levante, why not take the money? They themselves had only been promoted the season before and are not particularly rich so being offered even €1million could have helped balance the books.

With so many professional sports being run as businesses nowadays, it almost makes sense for team owners to be the ones fixing matches, although this does not make it acceptable. Those in charge of the bigger teams often have no real affiliation with either the club or the sport and just want to make a profit. If they cannot make that through the conventional methods, then fixing matches is a potential way of creating success and greater income. Take the 2006 Italian football scandal – in this case, five major teams were found guilty of selecting favourable referees who would be biased towards them and increase their chances of success. Two of these teams were Italian giants Juventus and AC Milan, both of whom were clearly motivated by greed for both more money and success.

Not all fixing, however, is initiated by team owners and club officials. Sometimes it is all down to the players themselves. They accept bribes and large payments, often from illegal bookmakers, sometimes to throw entire matches but, in a few cases, to fix certain elements. Take the Pakistani cricketers in 2010, who were paid around £150,000 to bowl just three no-balls in the final Test of the summer, although the performances of the team that summer suggest that they may have been paid more to throw matches.

What baffles me is that these are players at the very top of the game who already receive a salary most of us can only dream about. Of course, there are probably many more cases of fixing at lower levels that have not been reported about or even discovered, but what makes such well-known professionals want to risk their integrity and careers for a little extra money? Unfortunately this is something that has never been discovered – Hansie Cronje, the South African cricket captain found guilty of accepting bribes to throw matches, died in a helicopter crash just two years after being banned from the sport and many other convicted athletes rarely talk about why they did what they did. If match fixing is to be tackled, these individuals have to be questioned in order to prevent future occurrences.

Given its long history and the fact it still exists despite the huge changes sport has undergone, match fixing will be an issue for some considerable time at the very least. There will be periods where it is not heard of but, unless something major is done, it will hang around. After all, team owners, club officials and athletes are only human – wouldn’t you accept money to do something that may be a bit wrong morally and/or by law, but doesn’t affect life and death?