Time for a revamp 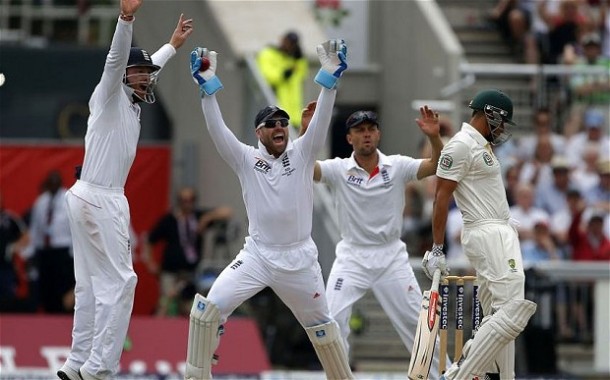 Yet again cricket finds itself in another technological mire. Yesterday the Aussie media finally lost it, accusing players from both England (namely Kevin Pietersen) and Australia of using tape to cover up the edges of the bats in order to prevent the thermal imaging technology Hot Spot from picking up the white marks when they snick the ball behind. Ever since its introduction in 2010, the Decision Review System (DRS), of which Hot Spot is a crucial element, has been under constant scrutiny, and not without good reason.

For those who don’t know, DRS allows teams to challenge an umpire’s decision. It was designed to overrule the ‘howlers’ that umpires can sometimes make. Each team having two correct reviews per innings, reviews which they lose every time they get a review ‘wrong’. In theory it’s a fantastic system, yet the players continuously abuse it. Captains often refer decisions more in hope than anything else, maybe even to waste time if they feel the game is getting away from them. This angers me – it’s not what DRS was created for. The Australians were heavily criticised in the first two Test matches of the current Ashes series for incorrectly using the technology and quite rightly – opener Shane Watson, a potential match-winner on his day, reviewed LBW decisions that were clearly out in both of the first two Tests, therefore wasting a review each time. This led to fellow opener Chris Rogers not challenging his LBW decision at Lord’s, despite the fact he clearly wasn’t out, as he didn’t want to lose the second review after Watson’s selfishness.

It’s not just the players who aren’t using the system correctly, though, as the third umpires haven’t fared much better in the series. DRS was designed so that any incorrect umpiring decision could be overturned by the third umpire, who has access to all the technology used by DRS as well as TV replays, yet this isn’t always happening. Aussie batsman Usman Khawaja’s dismissal in the recent third Test is the prime example – on-field umpire Tony Hill gave him out caught behind to a delivery from Graeme Swann, which was fair enough as in real time it seemed as though he had hit it. He reviewed it and both Hot Spot and the replays showed the ball was actually nowhere near the bat. The audio from Stump Cam also suggested the noise was made after the ball passed the bat. What the third ump (Sri Lanka’s Kumar Dharmesena) should have done was reversed the decision as is protocol as there was no definitive evidence that Khawaja was out, but he instead chose to go with Hill’s decision. Some are suggesting that this is because the TV umpire doesn’t want to overrule their colleagues but, whether or not this is the case, it’s very worrying that this yet another incorrect decision from an umpire with all the assets needed at their disposal.

Another problem with DRS is that players have 15 seconds in which they can decide to review a decision or not. For me this is far too long and has led to the development of desperation reviews, either from bowlers who want a wicket or batsmen who don’t want to be out. A batsman will always know if they’ve edged the ball or not so should only have 3 seconds in order to review a decision where they’ve been given caught and they don’t think they’ve nicked it. As regards the bowling team appealing a catch that hasn’t been given, there is the possibility that the noise could have been the ball or bat striking something else so they should have 7 or 8 seconds to make a decision, while both teams should have maximum 10 seconds in which to review LBW decisions. By reducing the time available this should decrease the number of wasteful reviews and stop players from incorrectly using the system.

It’s not just the system on the whole, though, that’s the problem but also the individual pieces of technology used in it. Hot Spot is under the most pressure due to the fact that it has missed a number of edges in this series alone, despite a revamp over the winter. There has been speculation ever since its introduction that batsmen are covering up the sides of their bats to stop the friction from the edges being detected, with the most recent theory being the tape. The journalists from Down Under who accused KP of cheating did forget, however, that Hot Spot picked up a think edge in the first innings than none of the Aussie players appealed for! This could be countered by the argument that he covered his bat in the second innings to stop a repeat, but I don’t think this is true. Despite his seeming arrogance, KP is a true cricketer who has huge respect for the game and I, for one, don’t believe he has ‘cheated.’

If there is such concern over batsmen covering their bats then why don’t the umpires check them before the game? Some say this could lead to a lack of trust, but the days of umpires having a drink with the players after the game are long gone, so this won’t affect the relationship between the two. Let them check the bats before the game to ensure they are ‘clean’ and then check them afterwards. Of course you cannot ban bat tape because it is a useful tool to stop cracks developing but it doesn’t take a lot of effort to take the tape off and have a look to see if it is there through necessity or to get away with a thin edge. The problem for me, though, is that Hot Spot is far too inconsistent and open to variations in temperature and even the type of bowler. It should be drastically changed or binned altogether.

I also feel that Hawk Eye isn’t being utilised as well as it could be. When reviewing an LBW decision this technology is used to track the flight of the ball and see where it would have gone if it hadn’t hit the batsman’s legs. If it predicts that less than half of the ball would have hit the off or leg stump then the decision gives the on-field umpire the benefit of the doubt and stays with their decision. The problem here is that Hawk Eye is so accurate that the margin of error needs to be less than half the ball. Everyone knows that the ball only needs to flick the stumps 99% of the time to knock the bails off, yet a batsman can survive a review if a fair part of the ball is hitting the stumps as long as the umpire has given it ‘not out.’ It’s not fair and should be reduced to a third or even a quarter of the ball’s width.

The final piece of technology that is being incorrectly used is ‘Snicko.’ It detects sound and uses then uses a graphic showing the sound waves, alongside cameras, to determine, firstly, whether or not there was a noise and then if it was ball hitting bat. It provides conclusive evidence to viewers at home as to whether or not a batter is out, yet it’s not used in the DRS because it takes too much time to load in order to be used. For me it is a fantastic piece of technology that nearly always shows whether a batsman hit the ball and a speedier version needs to be developed as soon as possible. With Hot Spot seemingly struggling to pick up edges consistently and umpires only relying on audio from the stump mic, ‘Snicko’ could drastically improve the amount of correct decisions from the system and needs to implemented sooner rather than later.

Don’t get me wrong, I love the idea of being able to challenge incorrect decisions, but I personally think that the changes I have suggested above need to be implemented. It will stop cricket from making the headlines for all the wrong reasons, as it has done far too often this summer, and focus on fantastic individual and team performances instead. Or the weather if that has the biggest part to play!

← Should I Play or Should I Go (and have some physio)?
Lightning Bolt →