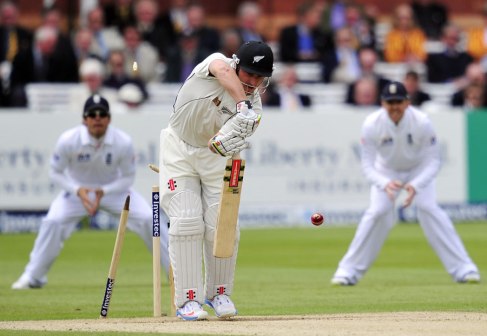 James Anderson and Stuart Broad produced a masterful display of swing bowling to see England to a comfortable victory in the first Test over New Zealand at Lord’s – but they didn’t have it all their own way until that fateful fourth morning.

Indeed, it was a match to forget for most of England’s batsmen. Many got starts but failed to go on and most didn’t seem to have the correct mental state for the occasion. On the back of some poor performances in New Zealand the batsmen were far too cautious in the first innings – England scored only 160 runs on the first day at less than 2 runs per over. For those of you who don’t really follow cricket, that is extremely low, even for Test standards! Some pundits were saying that it was still an enthralling day of cricket, but for someone who has grown up in the days of attacking 5-day batsmen such as Brian Lara, Kevin Pietersen and David Warner it was extremely painful to follow. This slow rate also heaped the pressure on England’s batsmen, drawing all of them into playing false shots in order to try and up the rate. The Kiwis have to be commended, their bowling was extremely tight, but England’s fear of playing big shots meant that they missed out on lots of easy runs. Spinner Bruce Martin, in particular, bowled some absolute filth that was not dispatched by our men. But, when paired with tail-enders, Jonnie Bairstow did indeed show that it was a lovely track to bat on.

This, however, would not have filled the bowlers with confidence, knowing that runs were indeed available on that wicket. But Anderson got the team off to a flyer, producing two magical deliveries to remove Peter Fulton and Hamish Rutherford, claiming his 300th Test wicket in the process. After a less-than-impressive and injury-plagued start to his career, despite a 5-fer on debut, Anderson has been a revelation since returning to the Test team in 2007. His control and discipline is astounding and he has to be the greatest proprietor of swing bowling in the world at the moment. But not even he could stop a bullish Ross Taylor from seemingly swinging the game back into the Black Cap’s favour. He brought up his half-century in just 49 balls and his innings of 66 was one of power and class.

New Zealand ended the second day trailing by just 79 runs with six second-innings wickets still in hand. They looked to have the initiative in the match, something neither English players or fans had expected before the game. But some rather reckless batting saw them collapse to 207 all out, Anderson ending with 5-47 and Stephen Finn chipping in with 4-63. England then came out and started solidly, getting to 36-0 before both Nick Compton and Alastair Cook were removed by some fantastic swing bowling from Neil Wagner and Trent Boult respectively. Jonathon Trott and Joe Root got England to the relative safety of 159-2 before the latter was bowled playing a lazy shot to Tim Southee. This sparked a collapse that saw England crumble to just 213 all out by the 12p.m the next morning, the only real resistance being offered by Broad.

Despite their collapse England went into the final innings in a relatively good position. New Zealand needed 239 runs to win, a score that would have been the fourth highest run-chase in Lord’s Test history. And with the amount of swing messrs Southee, who ended the match with career-best figures of 10-118, Wagner and Boult had found on a pitch that was getting quicker by the ball, everything looked good. But what followed next was unbelievable. In the space of an hour New Zealand had gone from a position where they could win to one where they were fighting to retain an inch of pride. Broad ripped through the top order to reduce the Kiwis to 29-6 at lunch, including a special delivery that moved up the Lord’s slope to remove Rutherford’s off stump and send it cart wheeling towards the ‘keeper (pictured). Anderson bowled with impeccable control at the other end and, between them, they saw New Zealand off for just 68. It was a true thumping of almost comical proportions given what had happened up to that point in the game, the innings being perfectly summed up by the farcical run out that ended the game.

Even though they won, England still have many things they need to iron out before the next Test, starting later this week. The batting is a big issue – too many batsmen got starts before getting themselves out. They just need to be told to play their natural game and not worry about the situation. One man who could definitely use this advice is Nick Compton – his two failures in this game have put even more pressure on him to perform, especially given the excellence of Root in the game. He needs to forget about what everyone thinks and just enjoy batting and he will get back to scoring hundreds. Personally I feel it is unfair to say that Root is his long-term successor – leave the future planning up to the management and cut the guy some slack! The bowling also needs some work as both Broad and Finn, despite their success in terms of wickets, were far too inconsistent in the first innings and have been for a while. They need to pitch the ball up more often and get it swinging, even if that does mean slowing things down a little. But, overall, these things are minor and this match has proven that an exciting summer lies ahead of English cricket fans.